Pejeng ECO Experiential Discovery Tours Some of you might know Pasta as Ubud’s raw organic Cacao chocolate supplier, or the exterminator man who looks after those annoying pests in your Bali villa or hotel. Pak Pasta lives in a small village called Pesalakan in Pejeng Kangin, 20 minutes NE of Ubud. Pasta and his father tend their rice fields diligently unlike the other rice farmers in the Banjar. The Balinese irrigation system for cultivating rice called Subak, was recognized by UNESCO in June 2012 as a World Cultural Heritage Site. 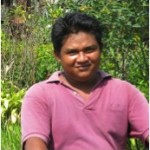 In 2012, young Pasta was selected as the Subak Umalawas Pekaseh, leader of the Subak Social Organization that has been functioning for hundreds of years. 32 year old Pasta, father of 5 year old boy twins and a charming elder daughter, addresses the challenges brought on between elder conformed minds and the young optimistic spirit. He’s eager to move the Banjar towards clean, sustainable organic farming practices where the farmers can sell their rice and other ECO produce like the cacao, coconut oil, avocado and chilies to local restaurants, hotels and markets and receive a good income for their families. 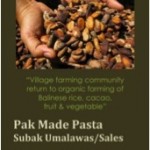 Pak Pasta attended with much interest, the Organic Consumerism Symposium of Bali organized by IDEP at their Demonstration Organic Farm and Education Centre near the Green School, “the greenest school on earth” located south of Ubud. He learned firsthand about organic and permaculture farming, the necessity in protect the environment, and how farmers play a role with tourist demands for healthy organics. Now, Pasta has great aspirations and dreams and believes that with the Balinese spiritual relationship to the five elements of life, soil, water, fire, metal and wind, and environmental education sponsorship in the local schools, there will be a very positive movement forward into past methods of natural cultivation and sustainable community living. Together with Swallow Guesthouse, “POP” Pesalakan Organic Project was founded.