The concept of harmony in the philosophy of the Balinese is utilized as the basis for achieving prosperity and welfare which, in its application, has developed and religiously imbued to become the concept of Tri Hita Karana or literally three causes of goodness.

This triad classification essentially signifies desa adat as a cosmological unit (Geertz, 1980) capable to be employed as a locally and culturally based environmental management unit. The spatially cohesive unit of a desa adat is also amplified by the fact that its dwellers serve a similar temple congregation and develop their local values and knowledge systems to be formulated in awig-awig or traditional codes. Seen in this context, as Egenter (1996) concludes for the Japanese village, the desa adat becomes an autonomous culture with all traits of a higher culture: harmonious philosophy, local ontology and value system, aesthetics, social hierarchy and so forth. In a wider region, this unit also serves as a middle ground between the two extremes of sacred ground represented by higher ground or mountain as the world of the gods, and profane ground represented by the sea, the abode of demons. Thus, the human settlement has the responsibility of maintaining the spiritual and natural harmony of this ground through prescribed rituals and yadnya offerings. As such, the desa adat environment harmony is dependent upon ritual maintenance and the avoidance of pollution (physical, spiritual, and magical). Conclusively, desa adat is the only Balinese settlement unit based on traditional-religious conceptions of man- environment relation.

Two core conceptions within the Balinese Hindu thoughts which the respondents from seven desa adat in Gianyar regarded as addressing the existence of nature and environment are the psycho-cosmic concept of cosmoses relationships and Tri Hita Karana or literally “three causes of goodness”. They are among the core Bali Hindu conceptions of space and also serve as fundamental philosophical principles which underlie the socio-cultural and natural worlds of Bali (Samadhi, 2000).

The psycho-cosmic concept is a Balinese Hinduism conception, which can be explained through symbols of the spiritual world within the sphere of physical world (sekala) and its relation with the metaphysical world (niskala) in a way similar to the relations between the bhuwana alit (microcosm) and the bhuwana agung (microcosm). As such, the human body is regarded as the world of microcosm which is differentiated from his immediate environment or universe (macrocosm).

The psycho-cosmic concept, being the most general conception of all is implicitly mentioned in many articles within the law. The philosophy of Balinese Hindu urges that a man as a bhuwana alit (microcosm) should harmonize himself with the universe as a bhuwana agung (macrocosm), because the human body and the universe are originated from the same elements, the element of Panca Mahabhuta or five basic elements (Puri, 1995) i.e. pertiwi (earth/solid substance), apah (water/fluid substance), teja (fire/light/heat), bayu (air), and akasa (space/ether). Thus, in regard to man-environment relationships within the Balinese Hindu conceptual framework, the maintenance of balance or harmonious relationships is one of the religious goals to be attained.

The balancing process is essentially included a religious instrument known as yadnya or holy sacrifice. In this respect, man has to offer yadnya to the environment before he can obtain or extract anything for his own benefit. To make just two examples, Tumpek Bubuh and Tumpek Kandang rituals are yadnya which should be carried out before one gets the benefit from plants and animals respectively (Dharmika, 1995). Thus, before man eats vegetables or erects bamboo wall, he has to first plant them, and therefore, sustaining the natural resources.

In these cases of Balinese Hindu livelihood strategy and environmental perceptions, Hobart (1990) concluded that Balinese attitude toward plants and animals are not only moral in nature, but rest on the belief that different kinds of beings co-exist in different places (desa), times (kala) and ways (patra). This dictum of desa-kala-patra, applies broadly in any aspects of life, allows Balinese Hindu to adapt and evolve within local context (Samadhi, 2001). 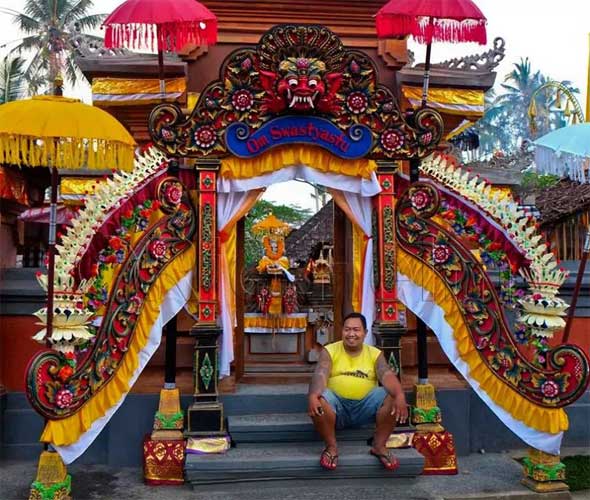