Mediums are not considered to be fortunetellers, per se, but they are classed as healers (Balian in Balinese; Dukun in Indonesian). Several people have tried to make a classificatory schema of Balians (Weck, 1986; van Eck, 1878; De Kat Angelino, 1919-21; van Bloemeen-Waanders, 1859; Eiseman, 1989), but their inconsistency points to the complexity of the use of this designation. In general, “Balian” refers to any traditional healer, but one can divide them in terms of their healing specialty, in terms of how they diagnose, in terms of how they receive the healing power, or in terms of the healing methods employed.

It may seem strange that a medium (Balian Taksu, taksu meaning spirit or power, or can be thought of as a kind of spirit) is classified as a healer, but one needs to understand the Balinese concept of illness. Illness is due to three causes: karma, black magic and imbalance.

Karma is generally outside of the control of the individual and the healer. At best one can merely lessen the karmic consequences. On the other hand, sorcery and imbalance are more under the control of humans and can be treated in essentially four ways: physically (such as broken bones), herbs, massage and pressure, and through magical means (mantras, amulets, and offerings). However, even herbs and massage must be accompanied by the appropriate mantras to release their power; so “medical” intervention must be combined with magic, as even the smallest aspect of Balinese life is impacted by religious beliefs (Weck, 1986, p. 2).

A medium can inform the sitter whether the cause of the problem is black magic (pungiwan) or imbalance. If it is the former, one will need to seek the help of a practitioner of white magic (penengan). Imbalance can be treated in several ways, but a major approach is through offerings. In general, help is sought from mediums when the illness is individual, as opposed to imbalance in the community (which can exemplify itself as a series of deaths, as plagues, natural disasters, etc.). Thus a medium heals in the sense that she or he aims at restoring balance in the individual (and, indirectly, in the universe) (Conner, et. al. 1986, pp. 97-8).

Balance is a central concept in the Balinese world view, so it will be worth our while to examine in what contexts it is used. In general, it is the pivotal idea of the special brand of Bali-Hinduism that is practiced in Bali. Bali-Hinduism results from four distinct sources: animism with ancestor worship, which was practiced by the original Balinese (Oka, n.d.); Hinduism, with special emphasis on Shivaism, brought in several waves from Java from the 7th to the 13th centuries; the magic of Tantric Buddhism; and adat, which is local law or custom. This creates a special blend of an all-pervasive way of life which emphasizes orthopraxy rather than orthodoxy.

Two fundamental ideas in this system which relate to the ideal of balance (Rwa Bineda) are: the three worlds, and macrocosm/microcosm. According to the Balinese cosmology, the visible world is really an illusion, a maya. It exists between the Upper World, the world of the gods, and the Lower World, populated by demons. Out of an agreement between the powers of growth and dissolution, the Middle world was created, but it is an illusion in the sense that the forces that shape it come from outside of it. Both its existence and the nature of its existence depends on the contrary forces of growth and dissolution remaining in balance. Thus, if the forces of the Lower World gain ascendancy, disaster and illness result. By the same token, however, the counter balance to the Upper World must exist, or the Middle World would be extinguished (Lansing, 1983, p. 52). The spirits of both worlds–the Dewas and gods of the Upper World, and the Kalas and Bhutas of the Lower World–must be appeased through offerings. Thus, Bali is rife with offerings, from the massive celebration of Eka Desa Rudra, which occurs once every 100 years, to the daily offerings on banana leaves left to every spirit in a compound (over 100 were left in the compound where I stayed). Thus, a constant concern is with the balance between the forces of the Upper World and the Lower World, making sure that the appropriate offerings are made at the right time. On the one hand, then, much illness and suffering are the result of imbalance, which can be rectified through appropriate offerings.

The second central idea–or set of ideas–places us more directly within a magical world view: macrocosm (Bhuana agung) and microcosm (Bhuana alit). The microcosm is within the self, while the macrocosm is the universe. The macrocosm and the microcosm mirror one another; even geographical features of the universe (which is thought to be only Bali) have analogies in the self (Lansing, 1974, p. 57). The important point is that the relationship between the two universes is so intimate that a change in one will produce an analogous change in another.

The Balinese combine this dialectical relation with the idea of the three worlds, understanding a whole series of aspects of the universe in this three-tiered way. As the universe (Bali) is divided into three parts–the sea, which is impure and represents the Lower World of demons; Land, which represents the Middle World of Humans; and Mountains, which represents the Upper World of Gods–so aspects of the world are so divided. Humans have legs, and body and a head. The house is conceived as having a leg, a body and a head (Budihardjo, 1990, p. 37). Similarly, the family compound is conceived in this way, as is the tripartite arrangement of the village temple. Even the village is laid out in this way.

The smaller reflects the larger and vice versa. Indeed, Clifford Geertz (1980) has argued that the legitimacy of the traditional ruler in Bali derived from his ability to construct a capital/community which reflected life in the heavens, that the Negara was a microcosm of the supernatural order. Thus, the mere fact of creating a palace or community of a certain type shaped the world around it, while the community itself became (or was) the state and not simply a metaphor for it.

I do not have time to discuss the idea of magic in any depth, but I would like to point out some characteristics of the “Law of Participation,” as Levy-Bruhl (1926) called this way of thinking. As opposed to Aristotelian logic which asserts the Law of Identity and says that a thing is what it is and nothing else, the Law of Participation asserts that things are both themselves and other things at the same time. All things in the universe, both living and non-living, are connected with each other so that no clear distinction can be made between one object and another, or between oneself and anything else. As opposed to the Aristotelian Law of Contradiction, which says that a proposition and its opposite cannot both be true, the Law of Participation asserts that no such clear distinction exits, that there is no real opposition between the one and the many or the macrocosm and the microcosm (and statements about them), for instance.

Thus, the epistemology and ontology of magic differ radically from the Western way of thinking. As opposed to Western essentialism, which asserts that a thing has an essential property and statements about it become true if they reflect this property (hence, the opposite would be false), no such essentialism is found in Balinese thought. One way to look at this distinction in epistemology is to contrast Western monotheism with Balinese polytheism. Just as traditional Western religion has asserted the existence of one ultimate being and one ultimate truth reflecting that being, Balinese polytheism asserts a plethora of gods and spirits, filling all three Worlds, and even seemingly contradictory forces must exist. Just as there would be no Upper World without the Lower World, so there could be no good without evil, and the presence of both are necessary to sustain life (the Middle World). Thus, apparently contradictory truths abound.

The closest Western philosophy to this position is found in Hegel (who was influenced by Heraclitus) who proposed that contradiction was at the heart of existence, defining “contradiction” as the “co-presence of mutually incompatible forces.” From this idea he developed the idea of the dialectic (theses, antithesis and synthesis), which characterizes both ontology and epistemology. Thus, life and logic are a balance between contrary forces. As the Hegelian antithesis is already incipiently present in the thesis, all things are related in the magical world view. The Laws of Identity and Contradiction do not apply.

The traditional distinction between fact and fiction is inappropriate in Bali, where there is no concept equivalent to the Western idea of fiction (Vickers, 1989), no juxtaposition of Wahrheit and Dichtung. For instance, by telling or performing a story from “history,” the qualities of the past can become the qualities of the present by “co-incidence,” not meaning that they occur by accident but that they have been made to “co-incide” or co-reside. The connection to Jung’s concept of synchronicity should be obvious in this regard. Events normally separated in time or place, or distinguished by size (macrocosm and microcosm), co-incide such that the qualities of one are made present in the other. Hence, any one thing becomes not simply a symbol (in Western terms) or metaphor for other things, but takes on the qualities of a host of things. Objects, symbols, concepts are overdetermined. One never looks for “The Truth” but one can recognize a host of truths, even contradictory ones.

Healers in Bali are a good example of practitioners of magico-medical knowledge. Their medical diagnosis and practice needs to be understood within the magical, animistic worldview of Bali in which spirits permeate reality. Understanding healing practices in Bali necessitates an examination of this worldview, as well as the particular practices and negotiations that the healers engage in with patients.

Balians tend to specialize in one particular area, and they often even specialize in a particular kind of illness. We can reduce the welter of kinds of Balians found described in the literature to three types: 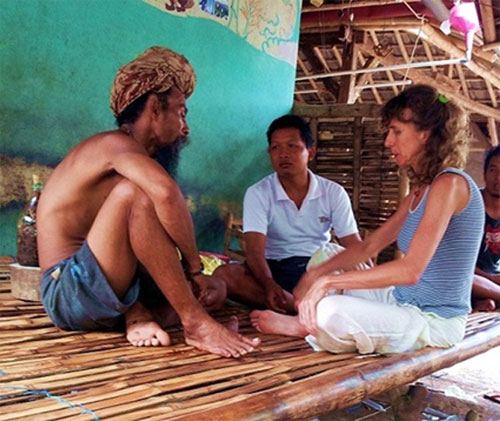 On Tour with guide Marcel in Amed